grilled cheeses i made for other people 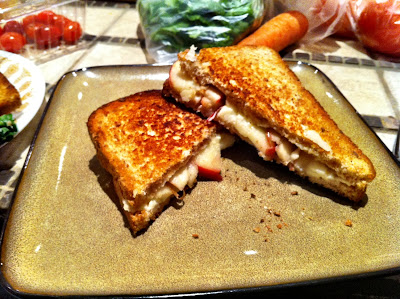 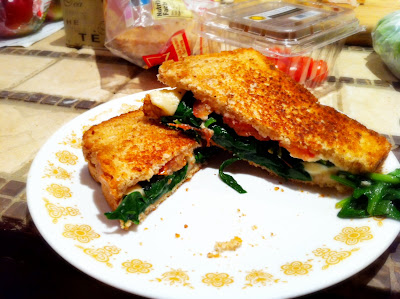 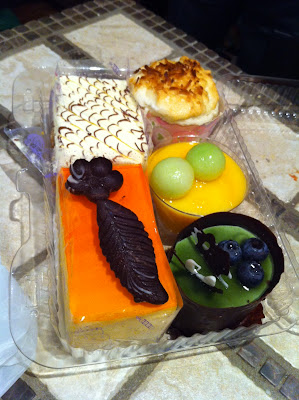 plus some chinatown treats
I ate a whole bag of puff cheetos this day, felt doomed several hours later
Posted by Lily at 5:41 PM No comments: 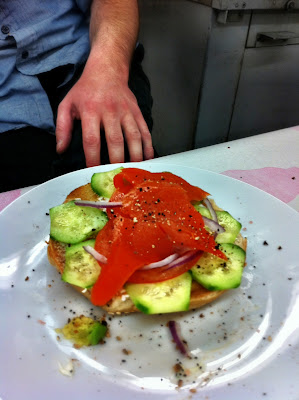 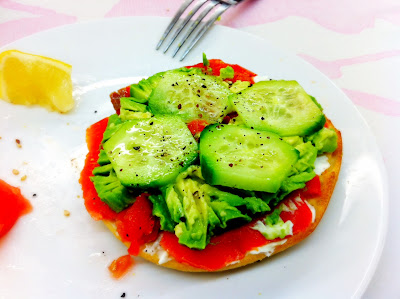 Oops, what did I do to this picture?
Yesterday I was not gluten or dairy free, but it was bagel time at Pace and I'm not the kind of person to say no to that. I don't even feel that bad today. Totally worth it.
Posted by Lily at 11:29 AM No comments: 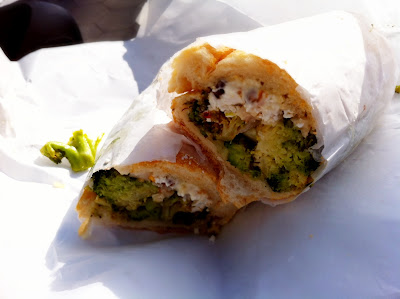 Broccoli sub from No. 7 Sub at the Ace Hotel in the Flatiron
Today was not a gluten or dairy free day. I'm not sure that any day is, but I try a little. Or not at all. 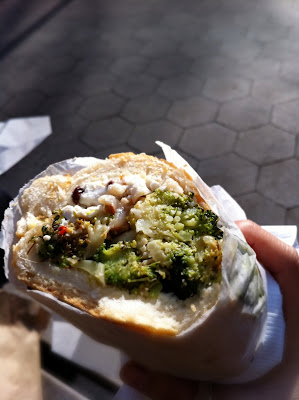 Broccoli, lychee muchim, ricotta, and pine nuts
This place is SO SO good, and it is one of my new favorite sandwich shops. The ingredients sound weird but they all come together so nicely. Like the lychee was a little spicy and sweet, which went really well with the broccoli and pine nuts, and then there was the soft cheese which was a nice added texture to it all. It's so weird to eat as sandwich where the main ingredient is whole chunks of broccoli, but it's amazing. The sandwiches are also enormous, so $9 doesn't seem that steep.
Posted by Lily at 7:42 PM 1 comment:

My kitchen now has a crockpot. Welcome to soup zone!! And pulled pork. 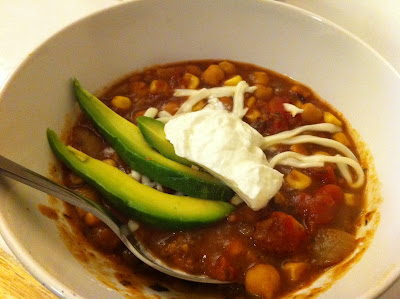 The first thing I made was chili. This is a vegetarian chili with 4 kinds of beans, corn, bell pepper, and tomatoes with avocado, cheese, and plain yogurt (instead of sour cream). Crock pot recipes are super easy, but I guess the hard part is waiting around for hours. This actually only took 3 hours, and I loved it. It has baked beans in it, which at first I thought was really weird, but it gives the chili a nice sweet flavor, which I like. I left out the spiciness.
Posted by Lily at 4:25 PM 2 comments: 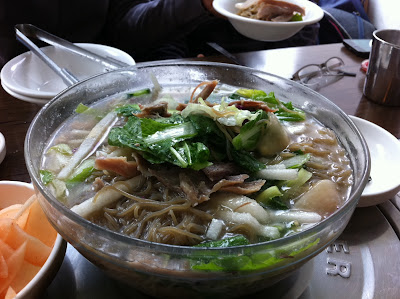 This is one of my favorite things that I had in Korea. It's the perfect summer food because it's cold and really refreshing, but I would eat it anytime!!! It's a cold chicken broth with noodles, chicken, and loaded with vegetables. You can add vinegar and some sort of mustard/horseradish to make it a little tangy and spicy. 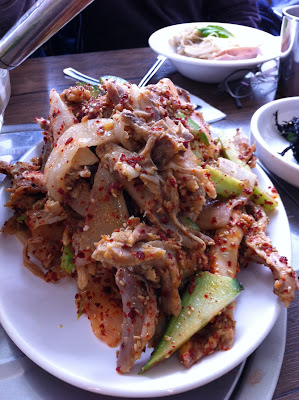 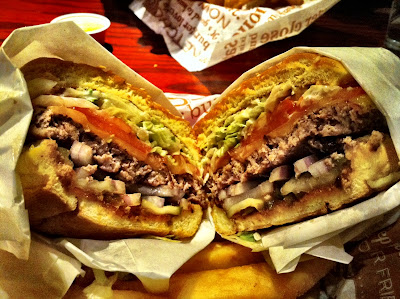 This was my "I'm back in America" meal...even though I ate 2 hamburgers and 1 pizza in Korea. It wasn't the same!! Actually, it kind of was.
I haven't had much to blog about since I've been back, which is really sad. I've only been eating smoothies, pita and varying combinations of vegetables and dressings, which is so unlike the way I would rather be eating, but I just don't feel like eating anything else. Trying to be mostly lactose and gluten free is the bane of my existence, especially since I rarely succeed in excluding both from my diet. Plus, I think food poisoning made me scared of food. How do I get back in the water??? Well yesterday I had Taco Bell...but without the cheese or sour cream.
Posted by Lily at 9:43 AM 1 comment: 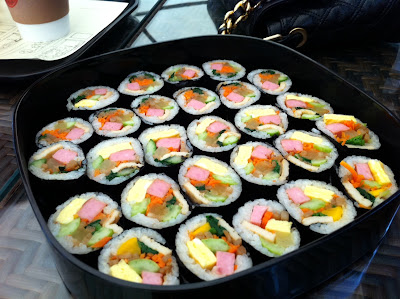 "Korean sushi" I guess...except almost everything in there is cooked. Eggs, cucumbers, spinach, carrots, takuan, and ham (sometimes fish cakes or sausage) 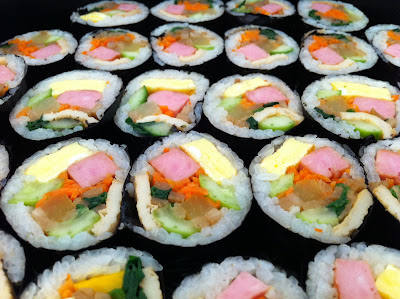 Real close
Back in NY, still got lots to post from Korea but really, that food poisoning made me feel bad about even looking at those pictures, so maybe not for a while. More food things from America to come though, I hope.
Posted by Lily at 5:14 AM 2 comments:

I just got back from Korea today, then I'll be back in Brooklyn in a few more days. Time is weird. I went to Busan for a few days, which is the 2nd largest city in Korea. I ate lots of weird/new things there, most of which I'm not ready to talk about because I got food poisoning, and it was a traumatic time for me. I don't know what exactly I got it from, but I'm guessing it was either some questionable street food or the unidentified raw sea-creatures I ate. This is one of the things I had from a food cart, but I don't think this made me sick. 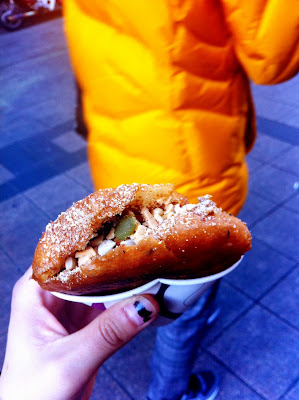 This is called hotteok, but the English spelling is nothing like it actually sounds in Korean, whatever.  It's usually dough filled with brown sugar, honey, and some sort of nuts then fried.  My mom used to make this for me, then when she started working, she came up with a bastardized version of this using Pillsbury biscuit dough from a tube, which was actually really good. Then she stopped making it at all. Bummer 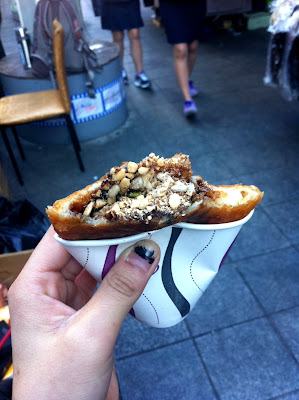 Apparently, Busan has its own version, which is filled with lot of different seeds and nuts. It's a much crunchier version of what I'm used to, but I liked it a lot. It's a good cold weather snack. Squirrels would like it.
Posted by Lily at 3:21 PM No comments:

The thing I was most excited about visiting Korea was eating lots of street food. This is a corn dog type thing, but instead of ... corn dog batter... it's this fish cake paste wrapped around a hot dog. And of course it's deep fried. Notice how perfectly the ketchup and mustard meet each other, like the DNA strand of a perfect human. Right? That's what DNA looks like?  Korean hot dogs aren't like the kind you can get in an American grocery store. They're skinnier, less salty, and a little sweet, which I like, but it doesn't really hit the trashy food spot I've developed. I've been eating SO MUCH FOOD.  My family are so nice to me and always buy me anything I want to eat. And I keep eating even though I'm full because I don't want to miss anything.
Posted by Lily at 3:52 AM 2 comments:

It was a long flight to Korea. I watched 5 movies. The food was just ok, sort of bordering on "not so good." But when you're thousands of feet up in the air, I guess you don't really have much of a choice in what you get to eat.

Bibimbap, which is just rice, meat, and vegetables all mixed up with sesame oil and red pepper paste. Plus some kimichi, fruit, and little scallion pancake bites that were really mealy and not good.

Chicken and mushrooms in tomato sauce with steamed vegetables and rice. Plus a "crab" salad. I don't trust airplane meat unless it's of the lunch meat variety since that stuff can be questionable even on the ground.
Posted by Lily at 1:07 PM No comments: