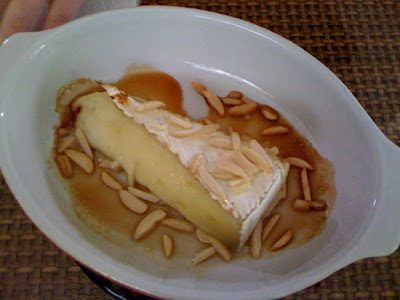 This is brie baked with honey and almonds. We were going to use walnuts, but didn't want to buy them so we used these almond salad toppings. It was so amazingly good. You can't bake it too long so that the brie gets too melty, but I don't know that brie ever really gets like that. I've never actually tried it. The only problem is that the honey and cheese cools down too fast and you have to eat it quickly while its still hot. 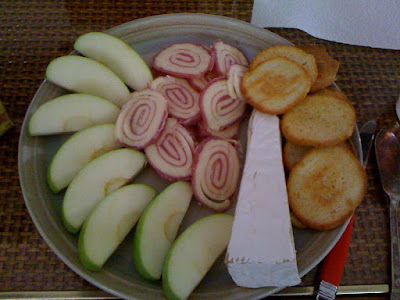 This is the rest of the brie and some apples and garlic bagel chips. I really like garlic bagel chips, but I think next time I might try a cracker that isn't too overwhelming because sometimes it was hard to taste the other food. Also, I always wanted those swirls of prosciutto and mozzarella, but never bought them while I was at school because my mom wasn't the one buying me food. But now that I am home, I can get whatever I want at the grocery store. It's great. So anyway, I finally bought some because I wanted prosciutto, but it was too expensive. So that's what those swirly things are. We ate them with melon. It was good, but it probably would have been better if it was just melon and prosciutto because there wasn't enough prosciutto for the melon.

Today I made split pea soup with ham. Now I am making a quiche.
Posted by Lily at 5:34 PM 3 comments:

Kayla threatened to start a food blog of her own and if she did, I know it would be better than mine because she lives in domestic bliss with people who always cook and eat pies. ANYWAY, I felt threatened and this is my response:

Blogger always uploads my pictures backwards and I never learn to do it right. 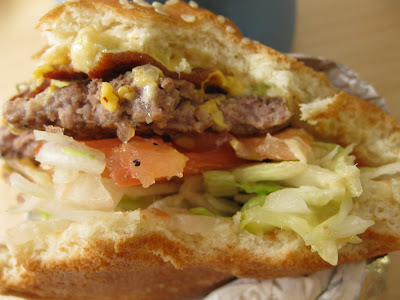 My dad decided to put new floors in our house, and we got hungry, so we went to Z's, which I haven't been to in forever and it was so good. God I love that place. This is half of my bacon cheeseburger. 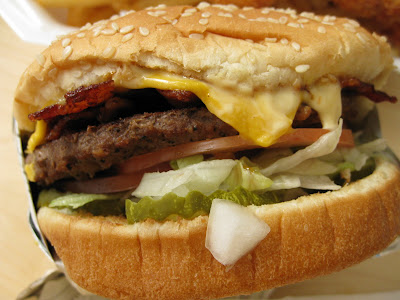 The bacon cheeseburger before I ate it. I don't know why the hamburger looks kind of weird and inedible in this picture, but it still tasted A+. The one thing I kind of don't like about Z's though is that they have this special sauce, which is great, but sometimes they go overboard and the burger gets too saucy, but it was just right this time. I also went to Dick's for the first time in a year. I don't have pictures, but I would like to take this time to say, suck it, In-n-Out. 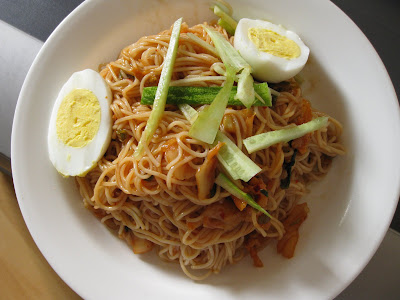 These are some spicy Asian noodles that I am not that into, but I ate it anyway. Plus, it is kind of a nice picture, don't you think? Maybe Tastespotting will catapult me to fame once again. 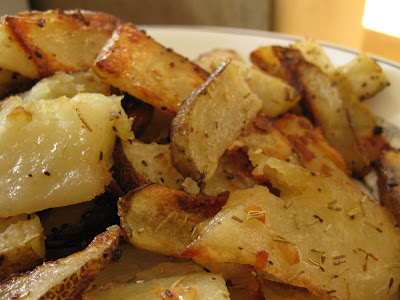 I love ribs. A lot. Sometimes I wish I was fat and from the South, because as much I love Barbeque ribs, I feel like I haven't had the best of the best, and I would also like to eat them everyday all the time. I am probably making generalizations about the South/Southern food, but who cares. Anyway, the point is, that I/my mom made some last week. But in the pictures they looked kind of gross, even though they tasted so good that my mom decided she didn't want to watch me eat because I was being such a slob (I was hungry). So I haven't really decided if I want to post pictures of them.

But I also made baked garlic fries. I already tried it once by making them fry-shaped, but they turned out kind of bad, probably beause I got too hungry to let them get brown and crunchy. This was my second attempt. I made them wedge-y and they turned out much better. I guess they don't look that crispy/crunchy, but they were. I think what makes them so good is that you have to heat up the oil with the garlic, and then everything is garlic infused and delicious. These definitely aren't like the garlic fries at Safeco, but I guess they are two completely kinds of fries beause these are baked and those are fried, and there is lots and lots of raw garlic heaped onto their fries. Also, we were almost out of ketchup, not that it was necessary, but I still wanted some sort of dipping sauce, so I tried it with this Wasabi Mayo from Trader Joe's. It was ok. I still haven't completely made up my mind.

Two things: one from me, one from Neal 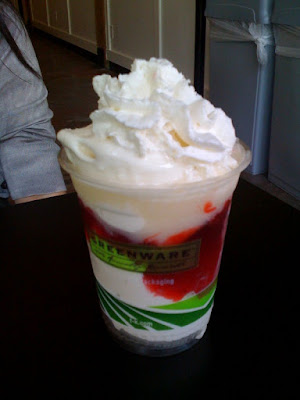 This is from Old School Frozen Custard in Capitol Hill. I think that you can get regular scoops of custard in cones which are pretty cheap. But I got this instead, and it was kind of $$ and I couldn't finish it, but it was really delicious. It was frozen vanilla custard with strawberries and whipped cream. I don't know how to explain what it tastes like because it's not totally custardy or ice creamy either. I was really sweet and rich, and the strawberries helped tone that down, I think. Elyssa got some that came in coffee, which I don't have a picture of. But it was really weird because the coffee was still warm but the custard was cold, and when I ate it, I couldn't really decide what temperature to feel. But it was good too. 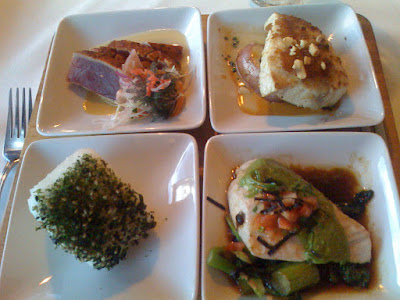 This one is from Neal. "this is called the surfboard sampler, haha, with three different fish, first is the blackened ahi (tuna) with a spicy soy mustard butter sauce i think it had wasabi in it, second is the macadamia encrusted swordfish with a lobster cognac sauce, and third is the monchong with jade pesto in a ponzu sauce." I think the bottom left dish is rice covered in nori and sesame seeds, but I'm not sure because Neal never told me.

Last week I went to a Mariner's game and had garlic fries for the first time in a long time, and god they were so good, so now I am going to make some and I hope that they taste just as good.
Posted by Lily at 4:39 PM 1 comment: 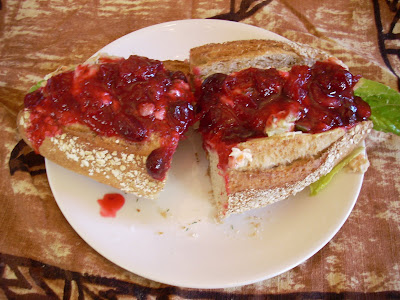 the day a tornado hit our kitchen

When school ended and the Met was closed, this is what happened in our kitchen courtesy of Jeremy and Chris, and a little bit of me 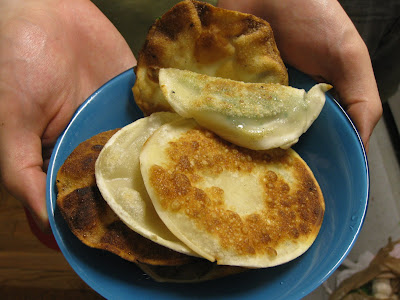 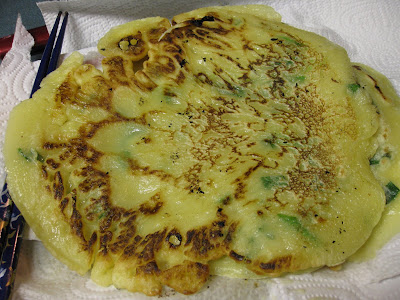 Scallion pancakes
This one was probably made after the fire alarm went off in our kitchen and it took forever for it to finally go off. I think it was worth it. 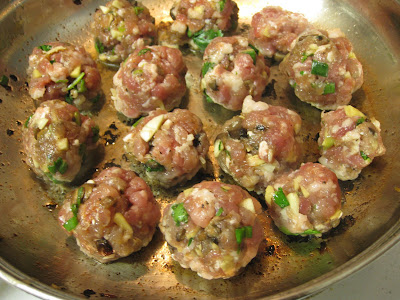 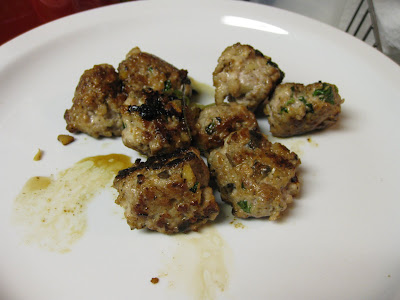 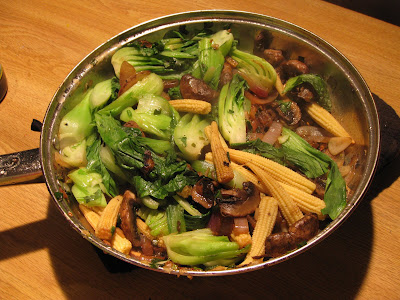 Everything else thrown together in a pan

I wish I had taken a picture of the kitchen after everything was cooked because it looked like a pile of trash. But good trash. Maybe Dylan has one.

Also, Neal is going to send me pictures of all the great things he eats in Hawaii to be featured RIGHT HERE. How exciting.

I've been eating so well since I got home and I haven't taken any pictures, which is too bad but I'll probably eat all of it again. Except this great pulled pork sandwich that I had in Bellingham. The sweet potato fries were so good too. My only experience with them before this last time was at the Met, and they were never really that good, but these were so perfectly crunchy and soft and sweet and salty. It's also nice to have a real kitchen again. I also REALLY NEED A JOB. I found a listing on craigslist for a job making crepes at some farmers market in Queen Anne. Maybe.

How is your summer? What are you eating? How are your allergies?
Posted by Lily at 11:03 AM 4 comments: