not working when you're working

Sometimes this whole perma-freelance/waitressing/whatever life is stressful because I never know what my cash flow is going to be like or when I'm gonna work or if I'm close to aging out of my Mom's health insurance. Things are always up in the air. But then there are days like today when I don't have work, and while everyone else is at their steady paycheck, nine-to-five job, I get to loaf around in the sun with my friends, eat forever, and draw stuff. Or you know, lie around with a serious beach hang over and watch crime tv. Those are the kind of days that make it totally worth it. 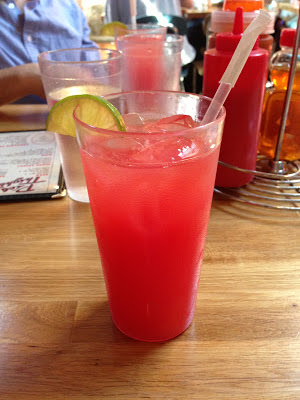 Watermelon juice from Pies n Thighs
I like watermelon juice, but I think I like eating it better than drinking it. But it looks nice and feels mega-summery.

On Friday, David and I walked around in the sun. Very slowly. Too slowly for him, which is saying something because he's from the South and I guess they move real slow down there. But when the sun is cooking your black hair and keeping you nice and toasty, it's hard to move fast...unless you're trying to make it to Pies n Thighs 20 minutes before they close for an hour. I hate it when people do that at my work, but sometimes it's okay to be a hypocrite, especially when hungry. I think that's bad advice though. 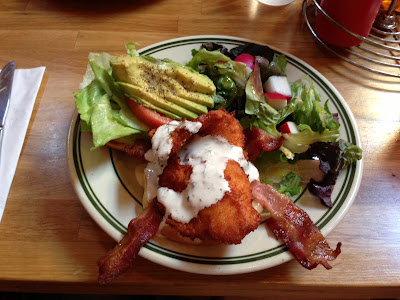 Fried chicken sandwich with bacon, ranch, and avocado. And a salad instead of fries, as if could have made this meal even a little virtuous 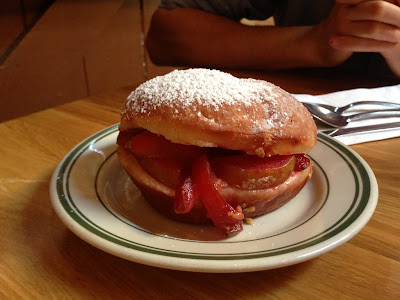 A fresh fruit donut with plums
I'm less excited by the baked goods at Pies n Thighs than I am by the fried things. 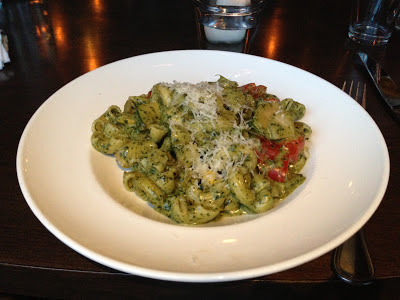 Obviously a fried chicken sandwich and donut wasn't enough for one day...
Veggie Mac from Brooklyn Label, with goat cheese, zucchini, pesto, and bell peppers. I picked Veggie Mac over Buffalo Mac for the same reason I ordered salad instead of fries, but it was just as creamy-heavy as any other mac and cheese. I don't know who I think I'm tricking. 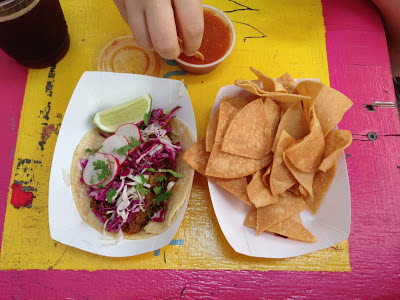 Today was one of the realest summer days so far--hot and muggy--and the beach was just swirling around in my head. So we escaped to the Rockaways where it was all breezy and sunny and a lot less baby-filled than the weekend. 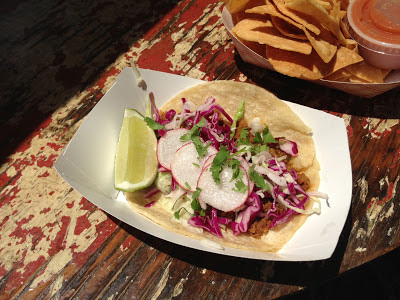 Rockaway Tacos: A carnitas taco that I would definitely order again, but only if the fish tacos weren't an option. Those are too good to not get every time. 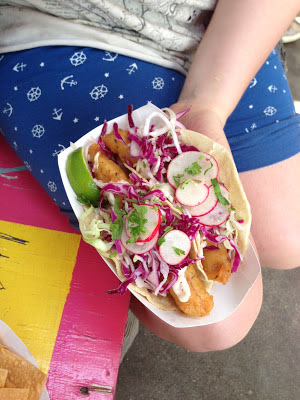 Best fish tacos ever
Crunchy and crisp on the outside, hot and flaky on the inside...plus all that crunchy slaw and a nice hit of lime juice. 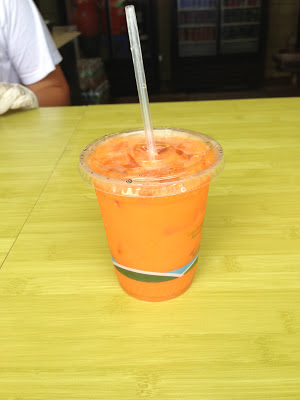 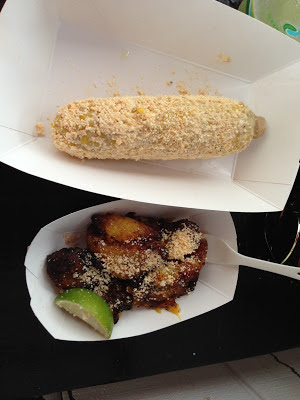 Elote and fried plantains--sweet and salty

Yeah, we went back to Rockaway Tacos after some sand sitting and water dipping because being lazy somehow makes you really hungry. You know how that goes. Notice how that extra indulgence put me over the edge: I'm feeling too lazy to rotate this picture and change out of my bathing suit. But I'm not too lazy to order from Seamless...which I'm waiting for right now while lounging on the couch, watching crime shows on my iPhone, and trying to get my salty beach hair untangled. Priorities, everyone.

Summer is a hard time to try and figure things out. All I wanna do is eat snacks and play with dogs instead of thinking about how I need to fix my apartment so I can get my stupid security deposit back or how I really need/want to get some kind of art job or how I should really redeem my Groupon for kickboxing classes. You know, all those "real life" concerns that your parents won't stop bothering you about because they're right and you really should be thinking about them but it's so sunny and warm and you're an adult and you know what you're doing so stop worrying. Except I don't always know and it freaks me out sometimes, but the good thing about being young and stupid is that I can put off all that serious stuff for grayer, colder days. I'll figure it out soon enough. 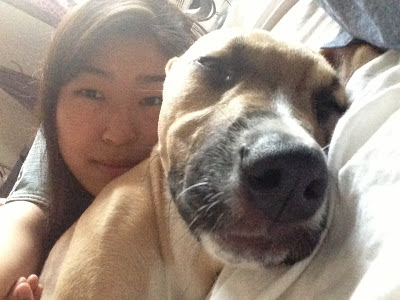 So that's what I did. Played with a puppy and ate til I couldn't eat any more. But now it's Tuesday and the weekend is over, so I guess it's time to get real. 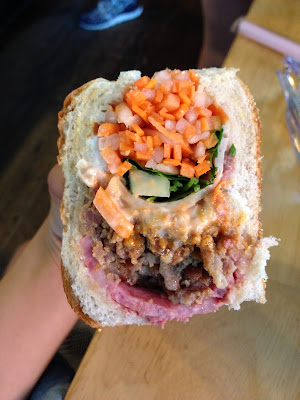 I think this Hanco's is better than the one in Cobble Hill. There were too many carrots and not enough daikon, which made it a little sweeter than I would like. But I guess that'll teach me to eat Vietnamese food anywhere else besides the restaurant I work at. You know what they say about karma. 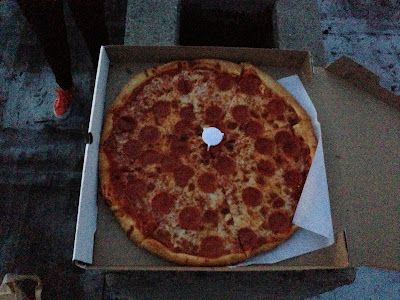 A pepperoni pizza on the roof of my future apartment 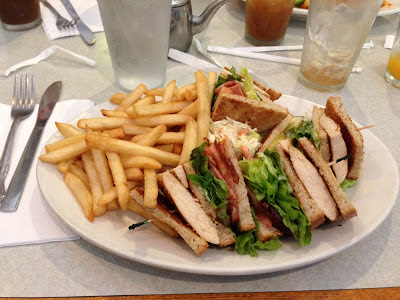 This is the reason why I never like the chicken-filled version of things--chicken tacos, chicken sandwiches, chicken burgers. The chicken is always too big, dry and flavorless and not even a good slick of mayonaise is going to save it. I took out most of the chicken ended up eating a mayonaise heavy, triple stacked BLT, which was totally fine by me, but next time I'll just order a BLT instead. 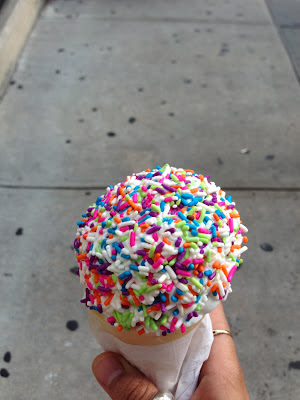 I don't like Tasti Delite and I'm usually never ever tempted to get any. Especially not with sprinkles. But I was on the Upper West Side walking around with Joe and Paul's puppy and there were all these maxi-dress mothers and fat polo shirt babies and fluffly dogs outside and it was so gross and cute at the same time, and I really just NEEDED that ice cream cone to make everything more picturesque. Plus, it was free sprinkles day and I like free stuff. It was really nice for the first two minutes, but after I ate the layer with the sprinkles, I felt kinda sick and threw the rest away into a clean trashcan on a clean street. The UWS is so weird.

some vegetables, but mostly meat

Last week marked two years in New York for me. I know, I know that's still baby status for all you ~real~ New Yorkers out there, but it felt big because I swore to myself before I moved that I would be out in two years. But I'm still here! I guess I stayed for the food.

Here's what I ate this past week: 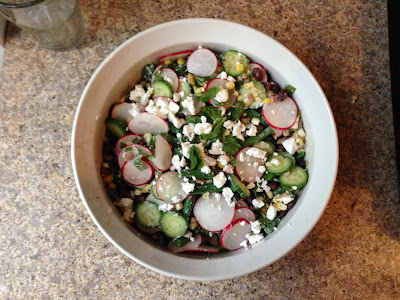 A crunchy salad with lime, mint, feta and sunflower seeds for a really rainy day.  I got the recipe from Smitten Kitchen, and for once, I think my food actually looked just as nice as hers.

Then the rain stopped, so Thanh and I went to Samurai Mama, which is one of the worst restaurant names I have ever heard. I'm actually totally against any restaurants with the word "mama" in it. It bothers me almost as much as when grown ass adults use the word "sammich" instead of "sandwich." Now you know one of my pet peeves. Or two? One and a half. 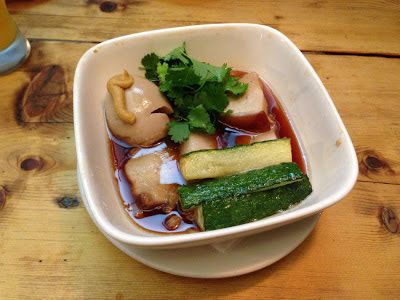 But...Samurai Mama serves some really serious food so I can't be mad. Like this melty, silky pork belly and zucchini. I wish it came with rice so I could've pour the fatty broth all over it. 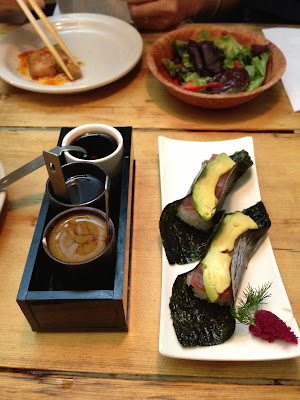 "Tuna Tacos"
Good but I wouldn't order it again 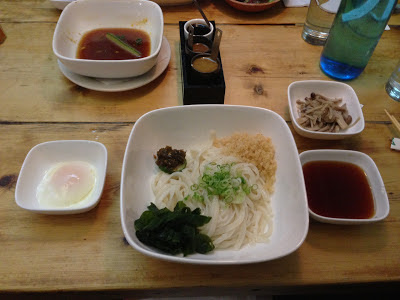 Then there was some more rain, which again, turned into another sunny day and left me wanting barbeque. The weather here is being really Pacific Northwest. 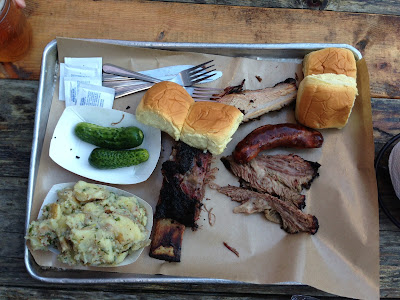 So Melissa and I went to Fette Sau. As usual, we got more food than we could eat, but having too much food is better than having too little. That's why me and Mel are friends. Starting from the half-sour pickles (which I've grown to like) and going clockwise--squishy rolls, pork belly, more rolls, spicy sausage, beef brisket, a short rib, and a too-large order of German potato salad.

I would end this with "Summer's here!" but it's raining really really hard again. So I guess we'll see about that.

I went back to Mukilteo last week. It was just for a hot minute though. My parents and I drove down the Oregon coast, ate lots of seafood, saw lots of nature, you know...Pacific Northwest stuff.  I actually didn't do any driving, mostly just stretched out and ate puff Cheetos and pepperoni sticks in the back seat. Somethings never change.

I also kind of forgot that I had a food blog, which is a little sad and weird, but then I remembered I have lots of food to share from my trip. Kinda sucks that you can't actually eat any of it, huh? 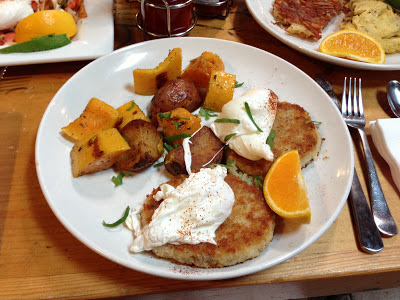 This is just a little peek--risotto cakes and poached eggs, with roasted butternut squash and potatoes. The vegetables were alright, the poached eggs were a teeny bit overcooked, but the risotto cakes were perfect. But how could they not be? What a good idea.
Posted by Lily at 12:00 PM 1 comment: