Someday iPhones will have really amazing cameras, or maybe I'll just get a real camera and have such nice shots of my food that you wanna lick the screen. But today is not that day, and these are the only two non-blurry pictures I have. Oh well! Yesterday was my birthday, which I celebrated at the new Hanjoo BBQ on St. Mark's. I've never been to the one in Flushing, so I can't say how it compares, but I was so into it. I should probably go back on a non-celebratory day so my judgement is more clear. And so I can eat more meat. 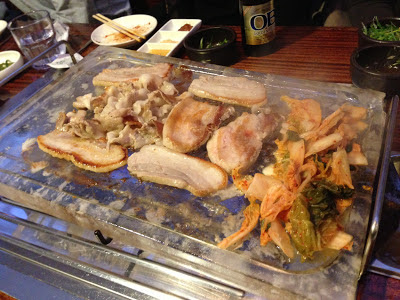 Hanjoo uses crystal grills, which apparently emit infrared rays and anion while it's heated and helps to cook the meat evenly. The pork was cooked perfectly, especially the think slabs of it-- crispy outer crusts and juicy, meatiness flow through once you take a bite. It's also tricky to cook the thinly cut pork because you don't want it to get crispy or be too soggy, it's a fine line, kinda like cooking bacon...unless you're one of those weird people who likes their bacon extremely limp or basically burnt. Anyway, apparently those infrared rays really do the trick, since the pork was cooked just right, turning into little curly pieces of meaty where the crackling fatty bits mingle so well with the kimchee and lettuce. 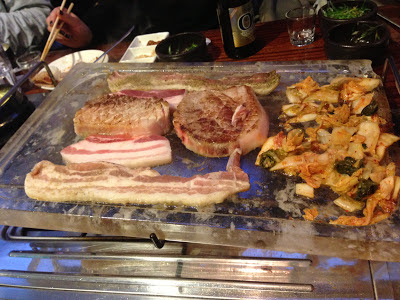 See all that meat. Look at it. Yeah!

I have to go take a shower now. Gotta wash this meat smell off of me.
Posted by Lily at 6:18 AM No comments:

Aw, look at my little bodega sandwich --a roast beef sandwich, which I ordered hot because the new guy that makes the sandwiches definitely smokes a lot more than the old guy, and I know they don't really use gloves. Yeah, you call eating this sandwich gross, but I call that trust. Gross trust. Man, I've had more sandwiches from my bodega lately than I really care to admit. But I got disgustingly sick last Thursday and ate nothing except sandwiches from my bodega and a bagel that I had delivered with soup. Yes, bagel delivery. Thank you, New York. Those probably weren't the best options for a sick person, but such is life in the food desert that is my neighborhood (and fridge). Real food, I will come back for you soon. 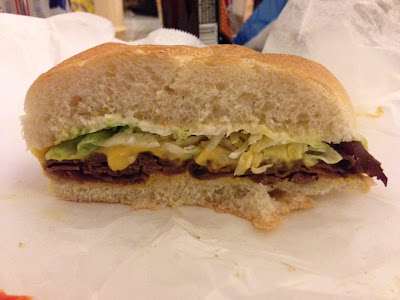 On cold days, I miss living in a city where cars are normal and you don't really have to be outside for long. I also miss a good hot bowl of pho, but for some reason that doesn't exist in this city. And if it does, I'm really pissed that I haven't been there yet. I just mean I haven't found a bowl of it that's made me want to sink into it like a hot bath. Sounds gross but if you have a great bowl of pho, I promise that's what it feels like. Anyway, we tried Pho Bang today on Jeremy's suggestion. It had a pretty decent beefy aromatic broth and the noodles were perfectly soft yet a little elastic-y, not like those clumps of noodles that I've had way too many times here. My favorite part about pho is adding in all the crunchy, crispy greens and lime wedge (best part!!) to round out the deep beefiness. So far, the best pho I've had in New York, yay. 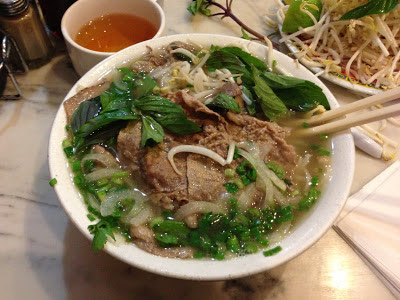 def back in ny

Judging by all the pizza I've eaten, I am definitely back in New York. I've barely been back a whole week and already I've eaten at 2 pizza restaurants, ordered pizza once, eaten pizza by the slice twice, and had a pizza with my drink at Lulu's. In between all that pizza has been a lot more food, including but not limited to the following pictures. 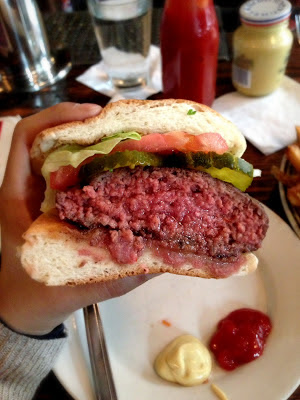 My burger from DuMont Burger, cooked rare, the best way to ask for it.
This burger was a lot more flavorful and way juicier than the last burger I had here, and I inhaled it. I think maybe it's because I asked for it rare. It has this nice like...crust on the outside, before your teeth hit the juicier bits. I loved that, but also, this patty is way too huge. The bun was fine the first few bites but then the patty is so fatty it totally compromises the integrity of the rest of the burger!! Don't you hate having that last bite of just lettuce and burger juice because your patty squished out of the bun? It's still tasty, but disappointing. But it does makes for really porn-y picture that makes me hungry even though I just ate my weight in dim sum. 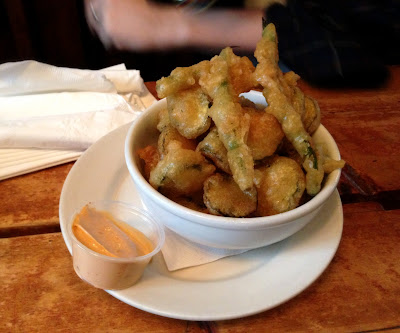 We also got fried pickles (and a few green beans and jalapenos, for some reason). They were better than most fried pickles I have had because they were actually airy and crunchy on the outside and the batter didn't slip off in a sad way. The beans and jalapenos were the best because they still had a bite to them, but the pickles were a little too soggy. I think it's just because they cut them too thin. It might've been better if they were sliced more thickly. 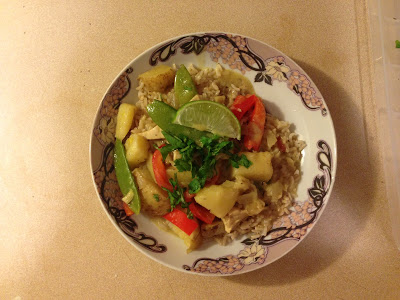 Ok so getting out of food review mode, Mel made this curry last week. It does look as saucy as it was in real life, but it was delicious. Coconut milk is magic. 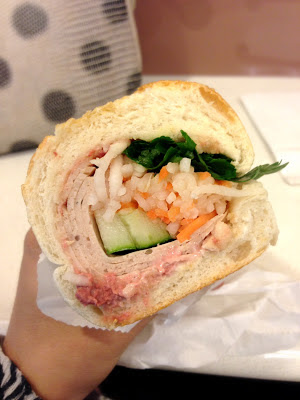 I started interning at Serious Eats, woo! It's also right across the street from Bahn Mi Saigon, which I like a lot. I've been twice already. I ordered the pork and pate sandwich, but I don't think I'll do that again. Next time I'll just stick with the BBQ Pork. This was like...kind of gray and rubbery and made me feel a little queasy, which is too bad because the last time I ate it, I loved it.

everything else from home

Leaving one home for another home is always weird. One the one hand it's like, ugh, back to real life, whatever that means. But it's also nice returning to my actual life because when I'm at home, I sometimes feel like I'm still in high school...which can be kind of fun when you're having all your meals paid for or cooked for you. Or when you're going to the mall 3 times a week. Yup. So in no particular order, some things I ate at home: 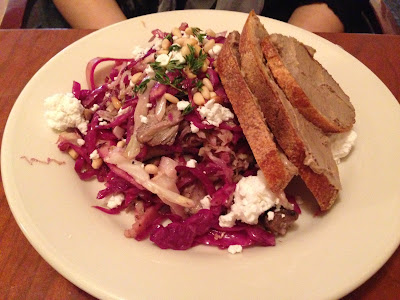 Duck confit salad from Cafe Campagne in Post Alley
My mom got this but I ate most of her duck liver toast. Because I'm an only child and I can do selfish things like that. 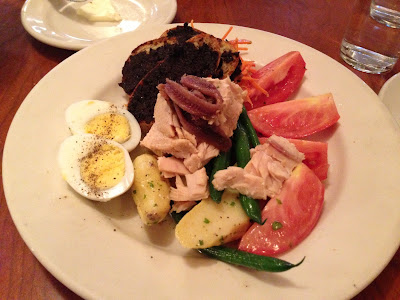 Tuna Nicoise also from Cafe Campagne
One of my favorite salads. I like the combination of really simple almost bland flavors and then getting blasted with a little bit of saltiness to make it all come together. Olive tapenade on toast was a good idea. 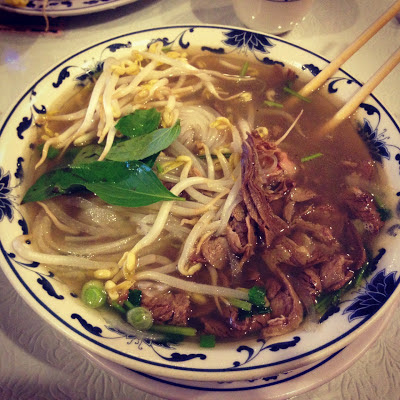 Pho from Phoenix Restaurant (maybe? maybe off highway 99 or that road that goes by Food Emporium on the east side, what street is that? I don't know where anything is anymore)
I can't find good pho in New York. Am I not looking in the right places? I swear every bowl I've had is just "ok" and lukewarm. I need to find a good bowl here because it's the perfect winter meal. The broth always feels so full even though it's very thin, maybe because of all the meat getting cooked under the pile of noodles. I always like to add tons of basil to it too. 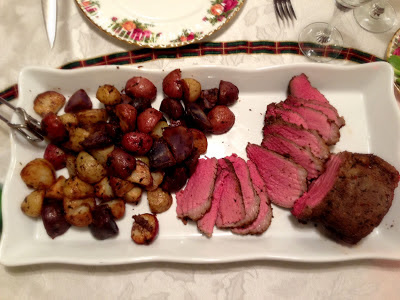 Oh I made roast beef. It was so easy. 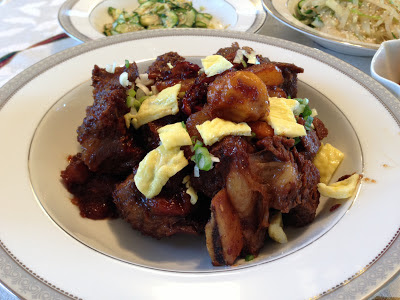 Hmm, these are Korean short ribs that my mom made for me before I left. They were SO good, I have no idea how she made them. There are dates and chestnuts and radishes involved. That much I know. It's sticky and sweet and nutty and so soft, it kinda falls right off the bone. My aunt also made a ton of kimchi and sent it over from Korea (I knooooww). I could eat those two things together forever.

Also, I'm never going back to Taco Bell. I felt like death later that evening and then developed some sort of awful stomach bug for a few days and lost like 6 lbs. Of course, I gained that all back as soon as I stepped foot on New York soil. Like I just inhaled and it all came back. I missed it. It's cold.
Posted by Lily at 6:59 AM 2 comments: