stuff i ate in paris

I went to Paris for the weekend, which is definitely not enough time to see/eat everything. There are some things I didn't get to eat like rabbit and crepes (why not???) and I wish I had had a few more days, then I could have tried all the foods I wanted to. But I still ate (and saw) a lot of really good things. It's so so different than Rome, and I think I like Rome more, but they're so different I guess you can't really compare the two. Paris has less dog poo on the streets though, I think. And on that note, here are things that made me wish sweats were acceptable attire. 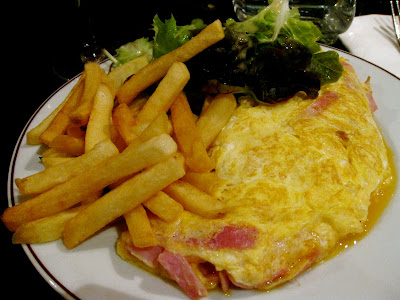 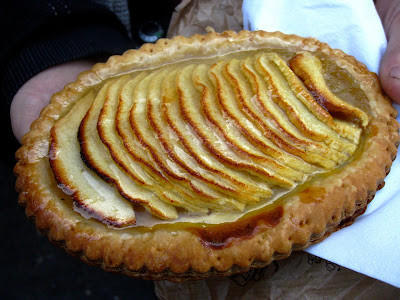 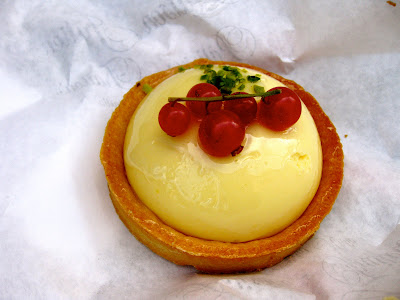 This was so GOOD. Key lime filling and a flaky crumbly butter outside and some berries. I don't know what kind they are. They were tart but went really well with the filling. I dont know what the green confetti stuff is. 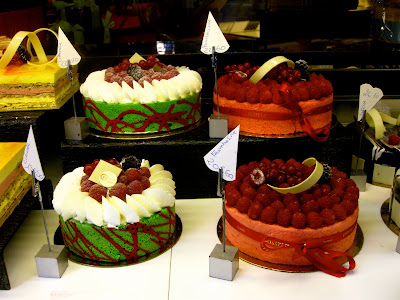 You might look at this picture and feel bad that you don't get to eat this. And there are probably jealous thoughts in your head and unsavory energy channeled at me. But I didn't get to eat this either, so don't feel so bad. 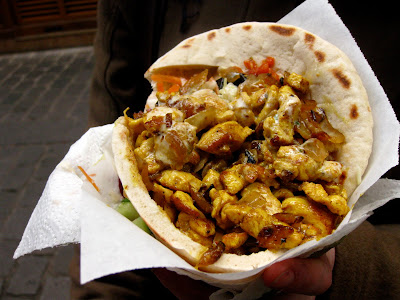 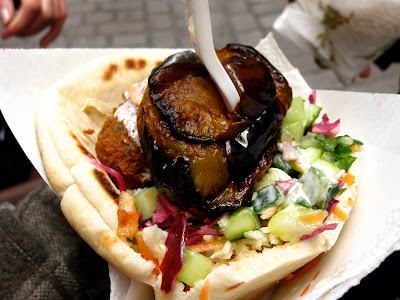 This was the most delicious falafel I have ever had. I thought about it all day. (That's an eggplant on top)

I wish I could have taken a picture of this little restaurant/stand because the line was super long and the little area where they put these together looked so colorful and pretty. I forget what the place is called, but I think it was in Le Marais.
We wanted to have a nice dinner without spending too much $$, and there was a really nice family-run restaurant by our hostel that had delicious food for such good prices. 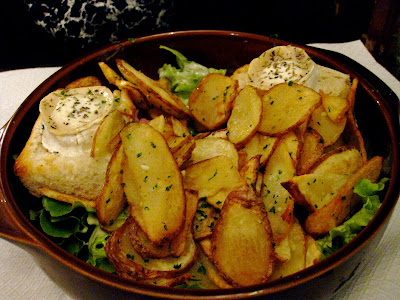 When we were waiting in line outside, we were eyeing these giant salads that everybody seemed to be eating. And Melissa and I really wanted one. But we also really wanted something else too, so we decided to split a salad and get our own entrees. Edo and Alexis did the same, and Eryn did the smart thing and only ordered a salad and tried a little bit of everything else. Our idea was good in theory, but the salads are enough for like, two meals, and the waiter thought we didn't understand that the salad counted as a meal, not a side. By the time my entree came, I was so full. I had to do a little under the table adjusting of my tights before attempting the second half of my meal, but it was worth it.

This salad had bacon, tomatoes, potatoes, goat cheese, and I forget what kind of dressing. 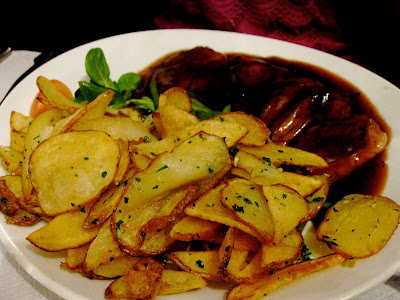 Alexis's duck with honey butter and potatoes and greens 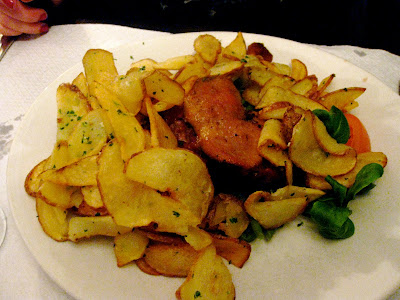 Melissa's duck confit (I think... it was some kind of duck), more potatoes, and green beans, if I remember correctly, but at this point, I was half way into a food coma, so my memory is hazy. 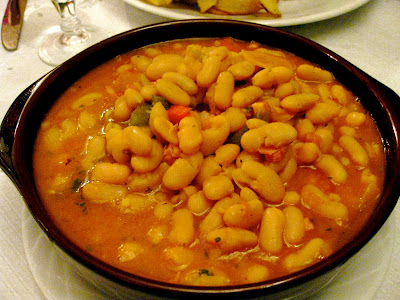 My food! It's called cassoulet, I think. It had white beans, duck, sausage, and ham, plus other vegetables like peppers. I couldn't finish the whole thing. I only got about half way though it and I kept trying to push past the wall of pain, but it was too much! 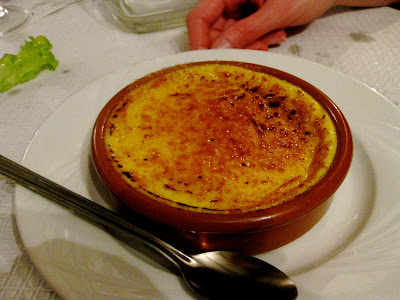 But I managed to take two bites of this creme brulee. 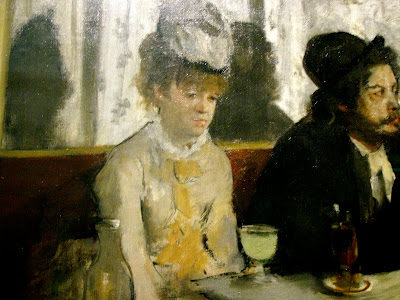 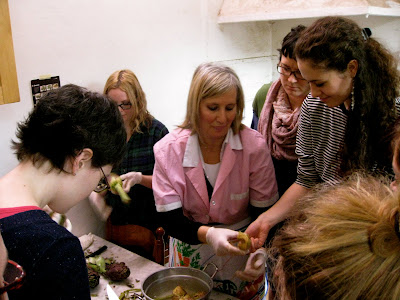 This is Nadia. She cleans the Cenci because none of us are capable adults who can take care of ourselves. Anyway, she is much nicer to us than we probably deserve, and last week she and her husband came in to show us how to cook some Italian Jewish food!! I spent most of the time furiously taking notes (even though I couldn't understand what she was saying) and pictures, so I really contributed nothing, but I acted like I did. There are a lot a lot of pictures that I have because there was SO MUCH FOOD, but it takes too long to upload them all so here are just a few. 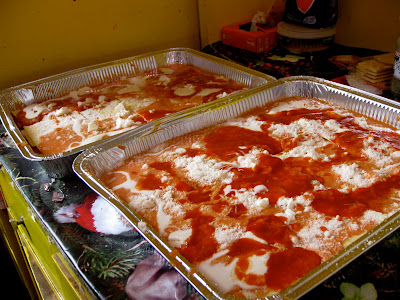 Lasagna before going into the oven (this is pretty easy to make, and I will give you the recipe/my notes if you want) 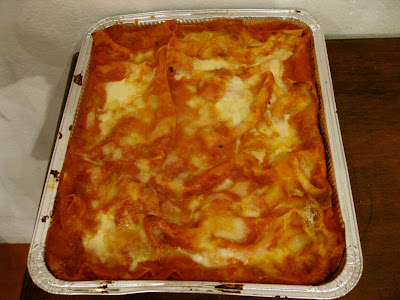 AFTER
there were 3 and at the end of the night, they were all gone. 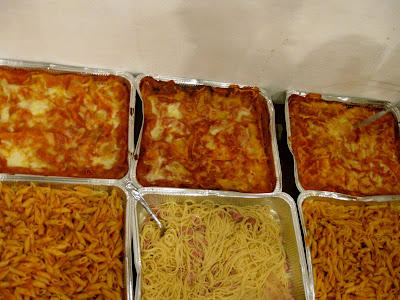 All 3 lasagne, plus a pan of pasta carbonara, and also some penne with a spicy tomato sauce with tuna, which I really liked, but not everyone did. 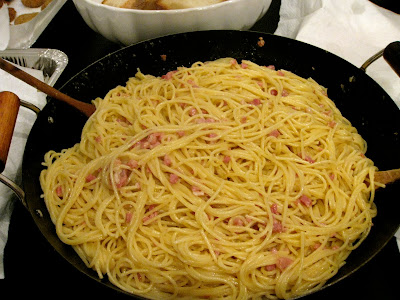 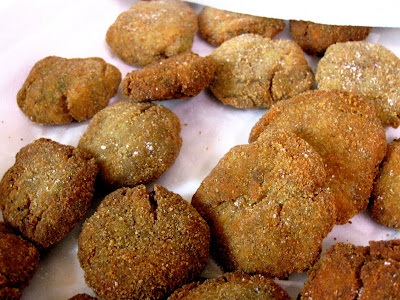 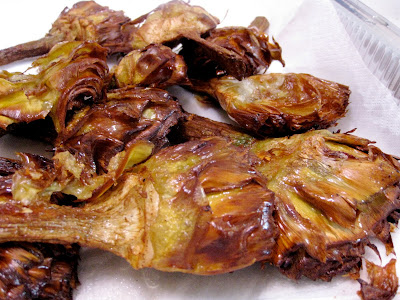 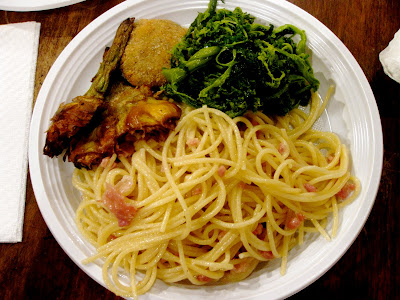 One of my two plates. That green mound is broccoletti. I have another picture of it somewhere.

I had to lie down after I ate. It was a meal that reminded me of why I rarely wear pants anymore.

Also, I just got back from Paris yesterday. More food pics to come
Posted by Lily at 4:50 AM No comments:

Cooking in the Cenci just got real last weekend. Lydia and I made beef bourguignon a la Julia Child. It takes a really long time, but isn't that hard, just labor intensive. But also, I think we get plus points for making it in a sort of poorly equipped kitchen and also even more points for Lydia managing to get parsley and bay leaves at the market without knowing how to say it in Italian. And finding chicken stock. If cooking were a video game, we'd probably hold the world record. I wish that joke was actually funny. 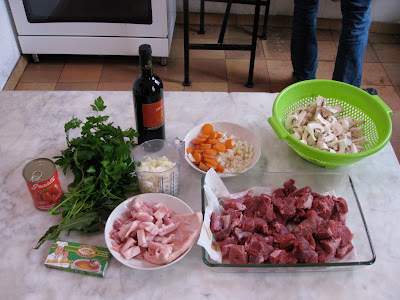 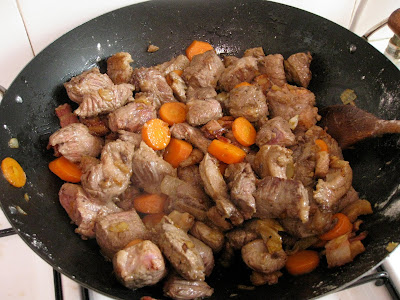 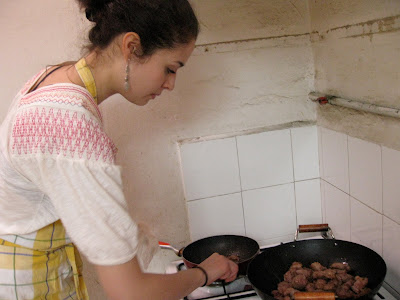 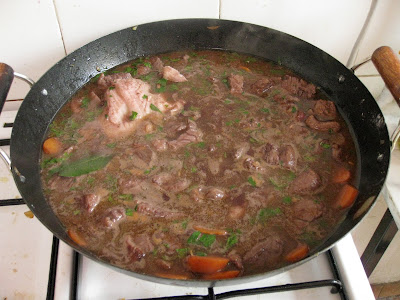 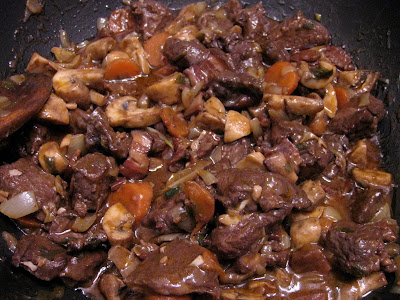 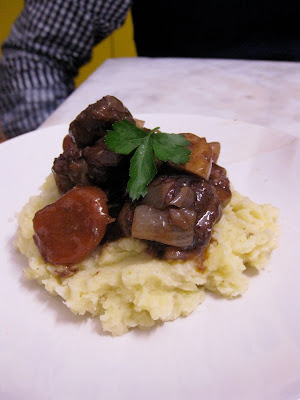 I also made mashed potatoes.
Posted by Lily at 2:45 AM No comments: 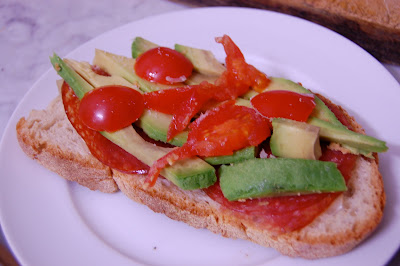 I was on a prosciutto kick then I traded it in for salami and at one point I had two different kinds of salami. But now I only have one kind and I wish I also had prosciutto. I should have never let it go. This is my salami sandwich with avocado and tomatoes, plus salt. 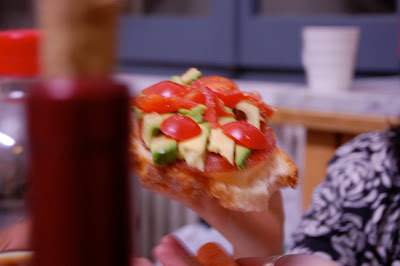 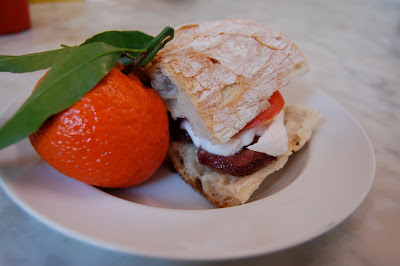 Edo's sandwich + fruit with leaves. Sausage, mozzarella, and tomatoes
Posted by Lily at 6:46 AM 2 comments: