This week is all about reality checks and keeping things in perspective before freaking out about them. And making peace with stupid things that should be left alone. I don't know what that has to do with any of this food, but I want to sound like I'm being thoughtful and wise, self-help book style. Is it working? 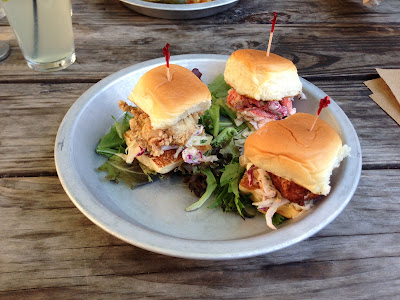 The best self-help method is to eat good food, which is something I do very well. I went to the Lobster Joint in Greenpoint, but there's one in the Lower East Side now, really close to my job. Actually a little bit too close. I know lobster rolls are expensive, but the Lobster Joint has a really good happy hour from 4 to 7. $4 sliders (lobster, fried oyster, crab cake), $4 beers, $4 cocktails, and some other stuff that I didn't bother looking at. Three lobster sliders comes out to just $12, but I'd say its the same amount of food as the lobster roll, which is $17. 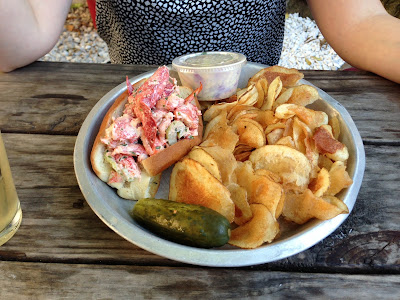 But that $17 also gets you all the sides. Chips are worth it, the pickle is worth it, the coleslaw is not. Not bad, just not exciting on it's own. It works better in a sandwich. 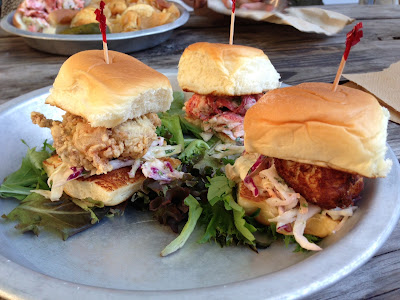 A slightly different photo of my sliders. From the right: fried oysters, coleslaw, a little tartar sauce; basically a lobster roll on a mini bun; mini crab cake and coleslaw. The Lobster Joint gets the frying right--crispy exterior, soft and/or flaky interior, and not greasy. The oyster slider was pretty good, but with choices like the crab cake and lobster, I won't get it again. Probably. Maybe. 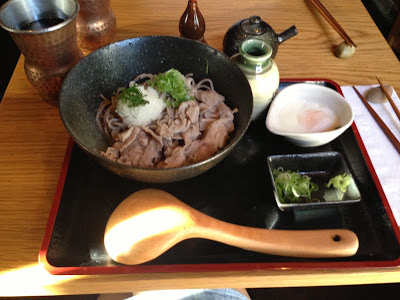 Oh and I went to Cocoron last week. 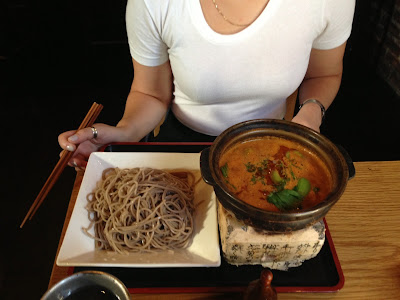 Their soba is so perfect.

I've been going through this phase (a really long phase) where I wake up in the middle of the night starving like crazy. And I can't go back to sleep unless I eat something. This is a huge reason why I haven't kept much food in the house lately, but I'm determined when I'm hungry, and I always find a way to eat something. It's usually not so bad, like I'll eat a few crackers and fall back asleep with crumbs on my face. But then sometimes it gets weird. One night I ate 2 bananas and a sheet of nori. I don't know why this is happening. 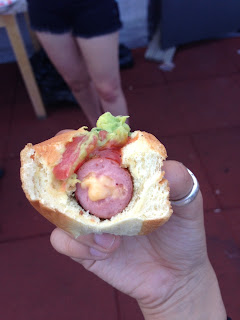 Maybe it's because I like to eat things like guacamole-topped, cheese-filled hot dogs during my waking hours and that just won't keep me full through the night. **Sidenote: I didn't know there was cheese in the hot dog til after I bit into it, but...I wasn't against it. 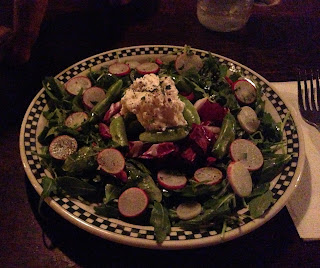 Or maybe because I eat things like this stupid radish and sweet pea salad to counteract the cheese filled hot dog. I tried to pretend it was awesome, but it was just okay and I was still feelin' crummy from the cheese dog. Besides, salad doesn't really keep you full either. So then 3 am rolls around and I'm hungry all over again. It's a vicious cycle that I've found myself stuck in.
Posted by Lily at 6:13 AM No comments:

I don't know why, but this week I somehow spent over 24 hours without eating, and if you know me, I have to eat like every 3 hours to stay sane. So it would be pretty accurate to say that this was one of the worst things that has ever happened to me. True trauma. 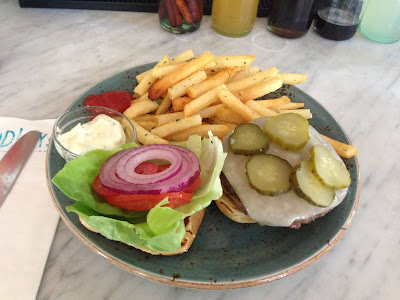 But that made my first meal of the day even better--cheeseburger at Dudley's and truffle fries. I'm not sure how I managed to order this, since I was pretty delirious by the time I got there. I regret not eating all the fries.
Posted by Lily at 7:14 AM 1 comment:

When it's summer hot, time moves in a weird way--sometimes slow and sticky, sometimes so fast and melty you don't even notice it happening. Food is the only way I can keep track of the way time is passing. I wonder what that says about me. 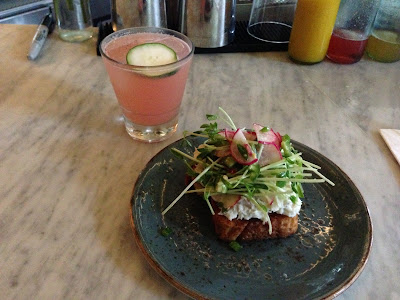 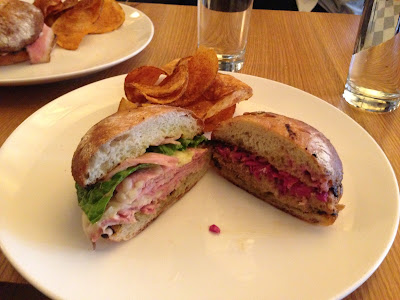 Half a smoked ham sandwich and half a pulled pork sandwich at Maysville. Both were really good, but the ham sandwich was better. I guess I'm just a sucker for anything with cheese. 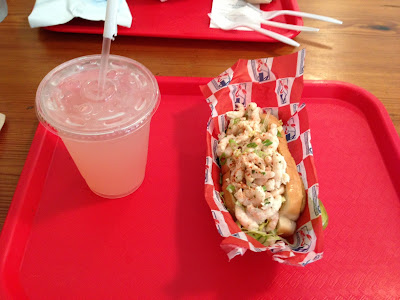 What happened in between those meals? Anyone's guess is as good as mine.

Summer is the season for hand-holdable foods. 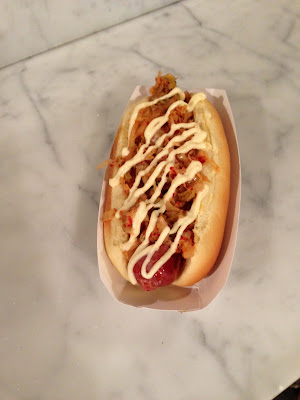 I love all kinds of hot dogs, even the Oscar Meyer kind boiled in water, so I don't necessarily feel the urge to eat $5 hot dogs very often. But this is a hot dog I'll be craving all summer. The sausage was juicy and salty (but not the kind of "pumped with sodium" salty a lot of dogs are) and had a really nice snap to it, which those $2-a-pack hot dogs never have. The kimichi and kewpie mayo were fine, but I keep forgetting that these are things I've eaten my whole life. I mean, my mom has been serving me cut up hot dogs and kimichi since I was in elementary school, so this idea is not exactly a revelation for me. So basically, next time, plain dog. The sausage really should shine on its own. 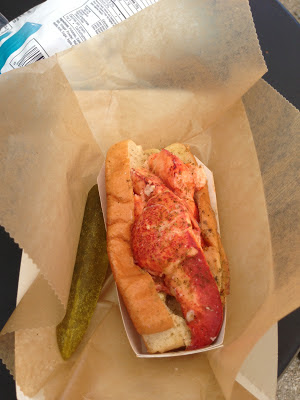 A lobster roll is one of those foods that I can eat in under a minute, no problem. But I always try to make it last as long as possible so I can savor all that sweet and tender lobster meat. Can you believe they used to feed this stuff to prisoners?
Posted by Lily at 7:36 AM No comments:

some old food pictures and some new ones

I am having one of those freak out moments where you suddenly feel like it's totally time to re-evaluate everything in your life but you don't know what to do about anything. Maybe it's a pre-quarter-life crisis? Or I just freak out when I discover that there are a lot of holes in my life plans. Just fill the holes with food... 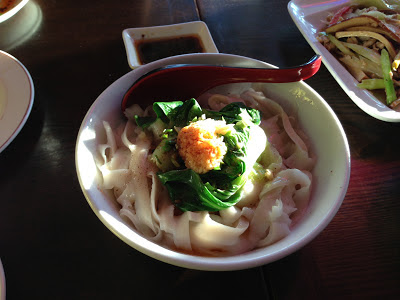 Knife shaved "dial oil" noodles at Uncle Zhou's, a Henan Chinese restaurant in Elmhurts, Queens.
I guess Henan cuisine involves a lot green onion, garlic, chile and Sichuan peppercorn, and these noodles embodied that. They were vinegary and very garlicky, which is basically what I look for in all my favorite foods. 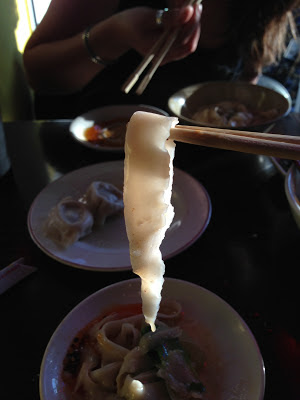 A knife shaved noodle
The noodles get sliced from a lump of dough (not pulled) and once they're boiled, they're super springy and chewy--a nice texture. 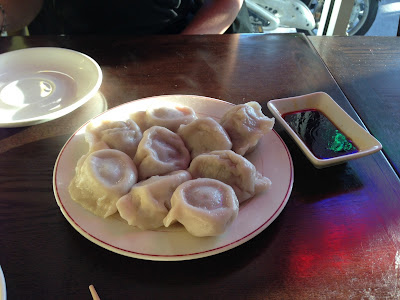 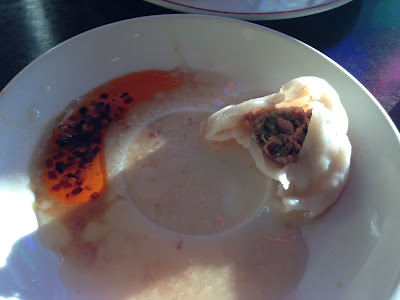 The dumplings were really delicious and juicy, but it was overwhelmingly lamb-y. I could only eat a few of them before feeling a little squicky, but I think I just wasn't hungry enough. I'd order them again and probably eat the whole thing. 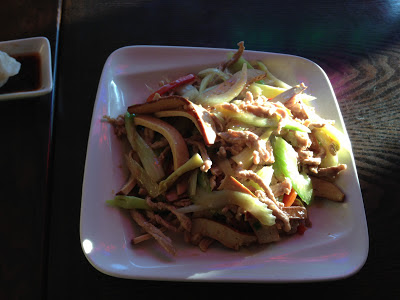 A terrible photo of sauteed celery, tofu, and chicken? Honestly I can't remember. I really enjoyed this dish but it wasn't particularly memorable. I think we meant to order sauteed celery and lily bulbs.. 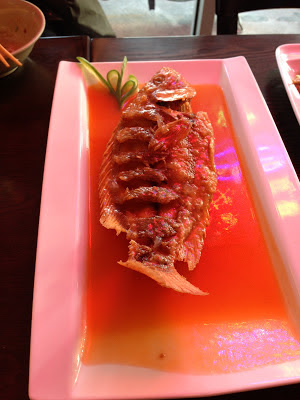 Fried fish in a sweet and sour sauce... 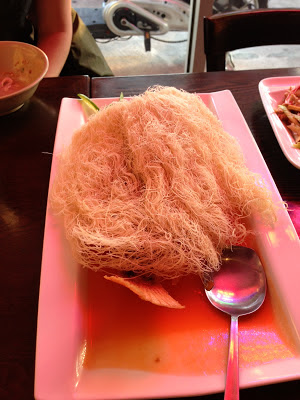 ...topped with a huge nest of baked noodles.
The thin crispy noodles contrasts nicely with the soft fish and the bottom layer of noodles soaks up the sauce pretty wonderfully. Hard to pick out the bones though. 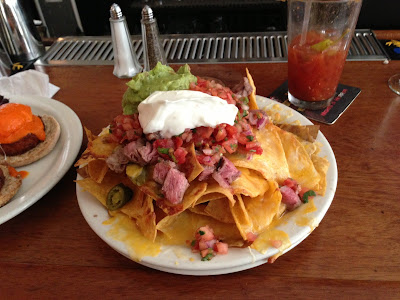 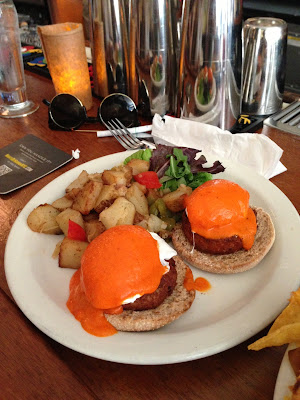 Crabcake Eggs Benedict, also at Brooklyn Public
The dry cakes didn't benefit much from the sauce, but the egg yolks saved them--I wouldn't order it again. 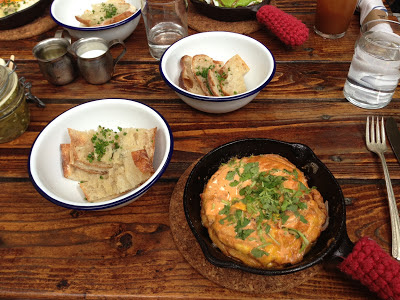 Everything there is so cute. I don't know how to translate into text the tone with which I'm saying "cute." Kind of like when you go to the Anthropologie store and you hate the aesthetic, but at the same time, you can't help but admit that it's kind of pretty and nice and maybe maybe you kind of want to dress like that. But it still makes you want to roll your eyes and/or gag. Except BSS doesn't make me feel that way because they have great food and nice people. But don't get their cold brew coffee. It's $4.50 for a tiny cup of half ice and half coffee, and despite serving their food in mini-skillets and farm-chic blue-and-white bowls, BSS is not cute enough to justify that price. Also, I drink coffee now! Sort of. 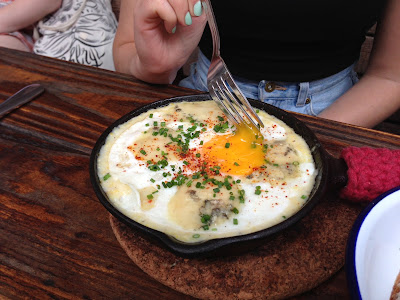 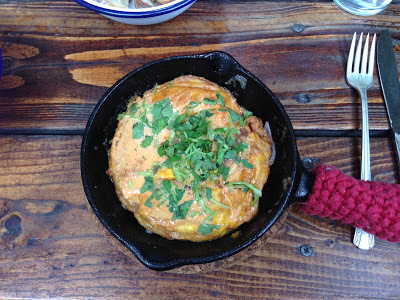 Another picture of my fritatta
Posted by Lily at 2:26 PM No comments: