Lately I've been drawing a total blank on restaurants I like or want to try. I think my brain has been totally stress-fried, I never know what's going on. So yeah, I got really excited when Mallory and Melissa wanted to go to Olea because I hadn't been there before and the menu looked good. I woke up way too early and was just agonizing over my brunch choices until we were sitting at the restaurant. This is actually Mallory's brunch. I think she got Parmesan toast with poached eggs, avegmolo sauce, (??? apparently a butterless hollandaise) and peas. I wanted to show this picture instead because it looks more interesting than what I got, and I also wanted to mostly talk about the home fries. I got the polenta, which also came with home fries and really beautiful orange (which means fresh!!) over easy eggs. The polenta was really amazing, a little more solid than grits but not served in the sliced form I usually get it in. They were really creamy in texture but not in taste. But I really think the best part was the home fries. They were perfect in every way and exactly how home fries should be, you know? Not that overly greasy kind, or the under-cooked over-paprika-ed kind, or the mushy mess kind, or even the well cooked kind that have wayyy too much salt. They were each individually crispy and seasoned just right, and just soft enough on the inside but with enough bite to it. Yep, love that starch. 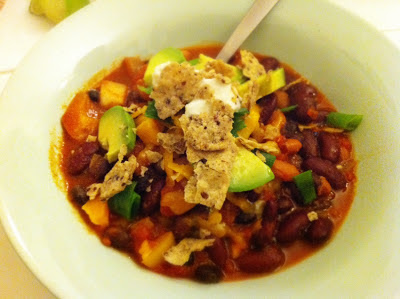 I made vegetarian chili that was so spicy I thought I was going to burn my eyeballs through the back of my skull. But nobody else seemed to have this problem, so maybe it was just me. I like chili without meat because I think that so often the ground meat just turns into mush that tastes like everything else in the pot. 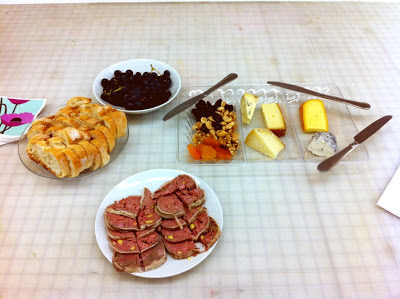 A little snack break at work with terrine Kathy and Richard made (I know, they make a lot of good food) and cheeses from Murray's Cheese. I've been volunteering for the cheese classes there so I can take them for free. It's been total agony and ecstasy for me. The classes are really interesting and tasty, obviously, and it's pure cheese heaven for like 3 hours. But then, my body just hates me later on for eating so many things I have an aversion to.  Yeah, decadent eating.  Life is rough.
Posted by Lily at 5:56 PM