I'm so glad cooler weather is here (knock on wood because if some hot temperatures sneak up on us, I'm going to go nuts). Mostly because cooler, sunny weather makes you want to do just be outside eating lots of good things. Ha, I always use the weather as an excuse to eat. Yeah, so Sunday was so sunny and beautiful and clear, and Matt and I decided that first, we needed to be outdoors and secondly, that we needed to be eating tacos. Both of these were good decisions, obviously. We went to Mole in the West Village or Greenwich Village? I still really don't know if they're two different places or the same thing, I keep getting different answers, but either way, I'm always lost there. 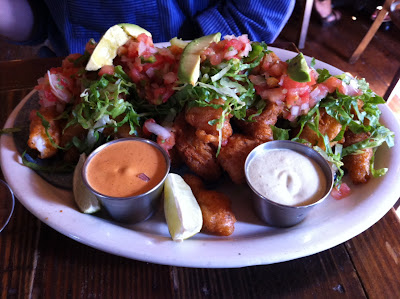 So..we thought this place was sort of pricey because of how good it was, we didn't realize that the portions were going to be SO ENORMOUS. Whoops...anyhow, you can't even see the tortillas under all that fish. Instead of 3 tacos, that was definitely enough for 6 or more. They were so delicious in the most fried way possible..like the batter was so fluff-ily crispy, almost in that way where you ask "is this too fried? no no no" but not because it's too overwhelming. And it goes just right with a little squeeze of the lime and maybe some of spicy salsa. That's why I think there could have been a higher tomatoes/onions to fish ratio. It helps to have something juicy and crunchy and vegetable-y with fried things. The outer shell sort of just fell open to the really hot (good sign right) flaky fish. 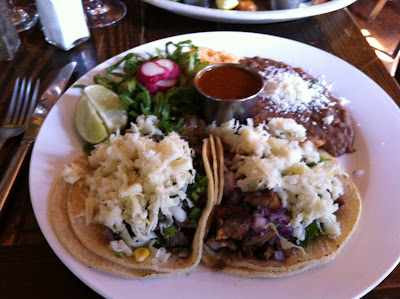 I decided to get two tacos, one carintas and one carne asada. They were both super flavorful and moist, like fall apart in your mouth, and way more than I needed to eat...but I ate it all anyhow. I sort of thought there was too much cheese though. 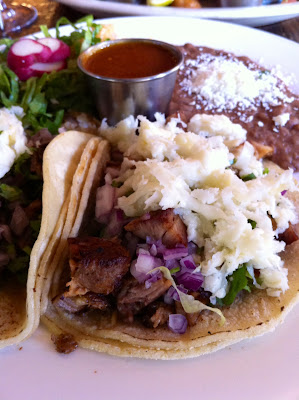 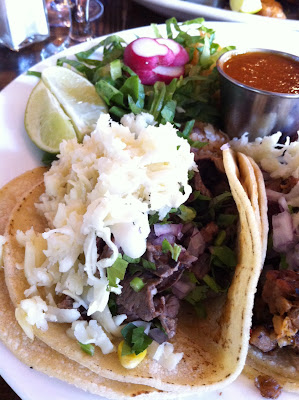